A Star Is Torn

The family tries to eat a total vegetarian meal and everyone except Lisa gets sick from eating the healthy meal. As they moan from the sickness Lisa sings them to sleep. The next morning they’ve recovered enough to go back to their old dietary habits. On television a commercial airs for a Krusty-sponsored “Li’l Starmaker” competition and Lisa’s singing voice seems a natural for the competition. Of course, Lisa and every other child in Springfield signs up. When Clarissa, one of the competitors sings the same song that Lisa was going to sing, and does it much better than Lisa believes she will be able to, Homer reassures her that he will write her a can’t lose song. Lisa sings the song and makes it into the final competition. Homer takes charge of her career and writes her more songs that take her into the finals of the competition; it’s Lisa versus Cameron, a boy all the girls go crazy over. When Homer oversteps his bounds with his obnoxiousness, Lisa fires him. Homer retaliates by getting himself a new client, Cameron. The final competition begins and Lisa’s sings a song she wrote on her own, a song about her relationship with her father. Homer tells her that he was always in her corner and that Cameron is learning the greatest lesson he can ever learn in the music business, don’t trust people in the music business. 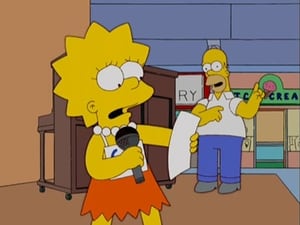