Mr. Monk and the Secret Santa

When an officer dies after drinking poisoned wine sent to Captain Stottlemeyer as a Christmas gift, the captain suspects Frank Prager, who tried to shoot him outside a bar several months earlier. Searching the crime scene for clues, Monk notes that the bullet holes seem to form a pattern, but neither he nor Stottlemeyer can figure out the message they’re intended to convey. After trying unsuccessfully to talk with Prager’s young daughter, Monk goes under cover as Santa Claus. This time he learns that Prager is hiding in a church with “”three ladies”” in front of it. But when Prager is caught and interrogated, it’s clear that he had nothing to do with the poisoned wine. With the other suspects on Disher’s list also eliminated, Monk and the captain are back to square one. But when Monk opens the card accompanying his gift from the Christmas party, he finds the clue that solves the case. 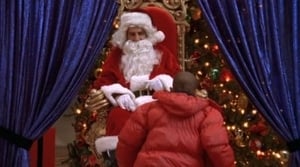