Mr. Monk Goes to the Dentist

During the investigation of an armored car heist involving the deaths of two drivers and the theft of valuable government bonds, Lt. Disher tries to convince Captain Stottlemeyer that he witnessed a murder while under anesthesia in the dentist’s office. When one of the highjackers, Denny Jardeen, is found murdered, Disher insists that Jardeen is the man he saw Dr. Bloom and his assistant kill while he was sedated. Stottlemeyer still thinks that Disher was hallucinating, and Disher angrily leaves the force, deciding to revive his high school rock band, the Randy Disher Project, as an alternate means of earning his living. Meanwhile, the only clue to Jardeen’s murder is two pairs of bruises each ten inches apart on the dead man’s chest. 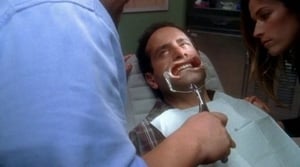