Mr. Monk and the Astronaut

When Captain Stottlemeyer suspects that a suicide is really a murder, Monk confirms his suspicions by discovering that the victim, Joanne Raphelson, was too short to have used the stool she supposedly stood on to hang herself. But the next clue, the remains of an olive, a cherry, and a cocktail onion on a stirring stick, leads Monk to suspect that the murder was committed by an astronaut, Steve Wagner. A little research reveals a motive–Joanne was about to publish a book revealing that Wagner had abused her five years earlier. Now all Monk has to do is to prove that Wagner could commit the murder when he was in outer space. 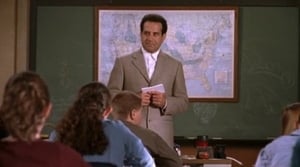