Mr. Monk and the Big Reward

Low on cash because they haven’t had a homicide to investigate in three weeks, Monk and Natalie search for the stolen Alexander Diamond, hoping to win the million-dollar reward. Unfortunately, they have competition in the form of a retired Scotland Yard investigator, a bounty hunter, and a gadget-loving private detective, all of whom want the reward money for themselves. Monk quickly figures out that the heist was an inside job and that one of the robbers was under five feet tall, short enough to hide inside a roll-top desk. He also discovers a clue linking a perpetrator to a transcendental meditation retreat. With their competitors close behind them, Monk and Natalie head for the retreat, where they find the thief, who is unfortunately dead. Meanwhile, Disher is having to interrogate a strange young woman who keeps turning herself in for such “”crimes”” as stealing pens or murdering a hamster. Monk tells Natalie that he’s solved the case and they race to the police station with the other detectives following. The only thing left is to find the diamond before their competitors do. 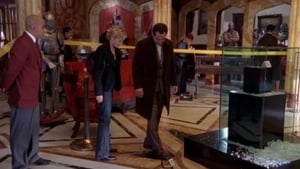