Monk is facing a crisis: he’s down to five shirts. But Inspector No. 8, the only shirt inspector who can meet Monk’s criteria for perfection, is not up to her usual standards. Sensing that something is wrong, Monk visits No. 8 on the job. The inspector, Maria Ortiz, informs him that her son, Pablo, has been imprisoned for murdering a fashion model, but she’s certain that he’s innnocent. Monk is chiefly concerned about his shirts, but Natalie persuades him to talk to Pablo because “”it’s the right thing to do.”” The conversation uncovers just one clue: Pablo can’t read English. When Monk realizes that the killer must have been able to read an emergency exit sign, he’s convinced that Pablo is innocent despite the DNA evidence used to convict him. With Stottlemeyer and Disher in tow, Monk and Natalie attempt to talk to the model’s former roommate and the fashion designer she worked for, Julian Hodge. But now there’s a new problem: Hodge wants thirteen-year-old Julie to model for him. Watching the rehearsal for a fashion show in which Julie will make her debut, Monk discovers a clue that points him to the real killer. When another supermodel is found dead, it’s imperative that Monk find new evidence to prove his suspect guilty of both murders and set Pablo free–and for Natalie to get Julie away from the person committing the murders. 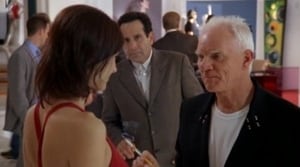