Mr. Monk and the Employee of the Month

When Edna Coruthers, a model employee at a giant chain store called Mega-Mart, is killed by a falling television set, Monk is called in to investigate by the store’s security chief–who turns out to be his disgraced ex-partner, Joe Christie. Neither Monk nor Stottlemeyer wants to work with Christie, whom they hold responsible for some missing cocaine and the death of two police officers, and both of them disregard the evidence that Edna might have been murdered–a broken shoe heel (suggesting that the victim ran from someone or something), her dust allergy (which normally kept her from entering the loading dock where the death occurred), and the three letters (in different handwriting but with similar stamps) complaining about the victim. Twenty-seven days later, realizing that the stamps were all from the same roll and therefore from the same person, Monk reluctantly agrees to help Christie discover a suspect and a motive by working undercover as a store clerk. But he still doesn’t tr 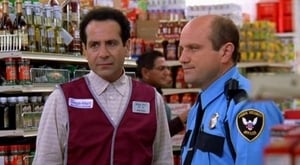