Karen Stottlemeyer has decided to film a “”cinema verite”” documentary about her husband’s work, but her timing couldn’t be worse. The police commissioner shouts at the captain (on camera) for focusing on a routine arson fire in a wig factory and relying on Monk to solve a more newsworthy case involving a female victim whose body was cut up with a chainsaw. Monk is in even worse trouble. After presenting some useful leads involving the chainsaw victim’s age and nationality, he accidentally erases several years’ worth of crucial computer files, and the enraged commissioner revokes Monk’s private practice license despite Stottlemeyer’s protests that doing so will destroy him. With Sharona forced to return to her old job as a nurse, the devastated Monk sits in the hospital hallway all day waiting for her until, at her exasperrated insistence, he finds a job with a magazine as a fact checker. Meanwhile, having identified the victim based on Monk’s information, the captain and Disher zero i 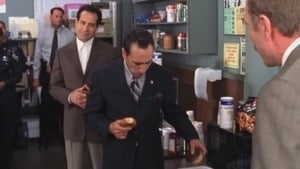 City on a Hill

The Walking Dead: World Beyond