Mr. Monk and the Panic Room

In yet another case of murder in a room locked from the inside, a music producer is found dead with bullets in his back, head. and chest, clearly neither an accident nor a suicide. But this time there’s a further twist: the dead man’s pet chimpanzee, Darwin, is caught with the murder weapon in his hand. Not wanting to make a monkey of himself by falsely accusing a chimpanzee of murder, Stottlemeyer takes the chimp into the interrogation room, tempting the animal to fire what he thinks is an empty gun. Meanwhile, Disher realizes that he’s inadvertently given the captain a loaded gun and panic ensues. When the gun goes off, endangering not only Stottlemeyer but Disher, Monk, and Sharona as well, Stottlemeyer is persuaded that the chimp is guilty and is ready to allow animal control to put him to sleep. Sharona, however, is convinced that Darwin is innocent. In desperation, Sharona resorts to breaking and entering to rescue Darwin, persuading the most unlikely person imaginable to take hi 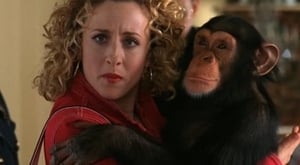