Mr. Monk and the Kid

After twenty-two-month-old Tommy Graser finds a severed finger and gives it to a policeman, Monk walks through the park with Tommy trying to retrace the child’s steps. He finds no body or other incriminating evidence, but he does discover a surprising affection for the placid and intelligent toddler, who constantly repeats Monk’s name and quietly submits to having his hands wiped when he touches “”nature.”” A lab technician identifies the finger as that of a twenty-five-year-old man, and Monk deduces from a callus that the young man played the violin. After visiting the home of Daniel Carlyle, a musician who fits this description, Monk concludes that Daniel’s mother and her other son, Jason, killed Daniel and that Jason is masquerading as his brother. Meanwhile, little Tommy is temporarily removed from the custody of his foster parents, and Monk surprises everyone, including himself, by volunteering to care for him for two weeks until his new adoptive parents can take him. With Tommy in 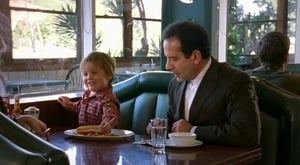