In the middle of the night, Monk receives a phone call from a drunken Stottlemeyer, who has gone to Las Vegas with Disher for a fellow officer’s bachelor party. Stottlemeyer believes that a wealthy casino owner has murdered his wife, but he needs Monk’s help to prove that the death wasn’t an accident. Unfortunately, when Monk arrives in Vegas with Natalie the next morning, Stottlemeyer can’t remember anything that happened the previous night–including how his pants happened to be thrown out the window. As Monk and Natalie explore the elevator where the woman died, interrogate witnesses, and reenact the death scene (with Monk in the role of victim), Stottlemeyer tries to retrace his steps and deal with Disher, who has become addicted to blackjack and fallen hopelessly deep into debt. When Monk, at Stottlemeyer’s insistence, takes Disher’s place at the blackjack table to win back his money, he figures out how the murder occurred as he simultaneously places winning bets, but the casino o 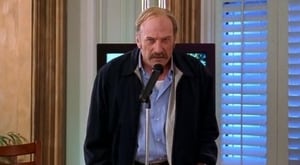