Mr. Monk Gets Stuck in Traffic

When Monk, Natalie, and Julie get stuck in a traffic jam after a multi-car collision blocks the freeway, Monk gets out of the car to investigate. He soon deduces from the absence of skid marks and other clues that the young man in the overturned Volkswagen that caused the pile-up was murdered and his body placed in the car to make his death look like an accident. But the highway patrolman in charge of the “”accident”” scene wants nothing to do with Monk (or the not-very-successful lawyer who has latched onto him), and the mountains blocking the signal prevent Monk from calling Captain Stottlemeyer for an authorization to investigate. Monk briefly returns to Natalie’s car, where he finds Julie in need of a bathroom and Natalie nursing an injured wrist. Unfortunately for them, Monk’s mind is on the fatality, and he returns to the Volkswagen. The angry officer gives him the victim’s name and occupation (environmental activist), but he still refuses to listen to Monk’s evidence. Meanwhile, t 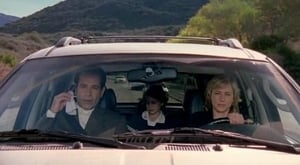