Mr. Monk and the Red Herring

With Sharona in New Jersey remarried to her ex-husband, Monk has been without an assistant for three months and it’s time to find a new one–if only he could find a suitable applicant. When Natalie Teeger, a thirty-something widow with an eleven-year-old daughter, arrives at his house, he thinks she’s applying for the job, but she’s really been sent by Captain Stottlemeyer to get Monk’s help–two men have broken into her apartment in the last few days and she had to kill the second one with scissors in self-defense. Examining Natalie’s apartment, Monk finds a single clue, an unused fish net caught between the sofa cushions, suggesting that the intruders were trying to steal Mr. Henry, Julie’s pet fish. But why would anyone want to steal a ninety-nine-cent red herring, er, crimson marblefish? A second clue surfaces when Lieutenant Disher finds a note in the dead perp’s pocket reading “”2:30 Sea of Tranquility”” and Natalie identifies the Sea of Tranquility as an exhibit at the science mus 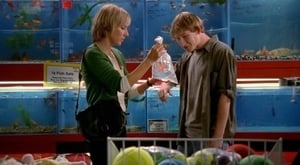