Mr. Monk Goes to the Theater

Sharona’s actress sister, Gail, is suspected of murdering Hal Duncan, a fellow actor who dies onstage after Gail stabs him with what she insists is a retractable knife. When Sharona’s mother (who thinks that Sharona is Monk’s partner, not his assistant) arrives for a visit and Sharona tells her the bad news, Monk and Sharona promise to “”do whatever it takes”” to discover what really happened. “”Whatever it takes”” turns out to be a bit more than Monk bargained for, however. After talking with the props manager, he begins to suspect that Jenna Ryan, Gail’s understudy, somehow killed Duncan and framed Gail, even though she was at a party on the other side of town when Duncan died. In order to talk with and observe Jenna, he endures a painful half hour at a speed dating service and even agrees to take the dead man’s part in the play for two days until a new actor arrives. While Monk is on stage battling stage fright and fully aware that one of the knives on the stage is real, Sharona searche 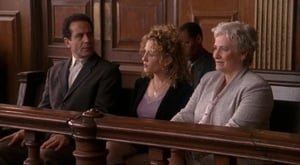