Who would murder a death-row inmate forty-five minutes before his execution–and why? That’s the question Captain Stottlemeyer asks Monk–but Monk’s response is to ask why it matters. As Monk is hurrying to leave the prison, however, he gets a phone call from his old nemesis, Dale “”the Whale”” Biederbeck, that changes his plans. The police consider Dale a suspect in the inmate’s murder (the young man owed him twelve hundred dollars) and refuse to give him a window in his cell until his name is cleared, so Dale strikes a bargain with Monk–solve the case and he’ll provide information about Trudy’s murder. After interviewing the cook who prepared the dead inmate’s last meal, Monk notices that another cook never clocked out the evening before. The missing cook is found dead in a freezer with a wad of bills in his apron pocket–clearly the person who bribed him to poison the inmate was afraid he would talk and killed him, too. On his way out of the prison, he receives another phone call, th 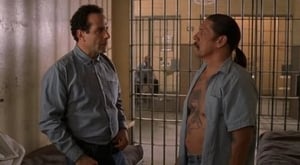