Mr. Monk and the Missing Granny

Unable to pay for Monk’s services as a private detective, middle-aged law student Julie Parlo offers him a trade–she’ll help Monk become reinstated as a policeman with the SFPD if he’ll help her find her missing grandmother. The only clue to the identity of the kidnappers is a roughly drawn lightning bolt on a note left at the grandmother’s house, leading Stottlemeyer and Disher to suspect the former leader of an anti-Vietnam War group from the Seventies. But when the captain, anticipating Monk’s reinstatement, invites Monk to help him with interrogation, Monk accidentally discovers that the suspect’s tattoo doesn’t match the symbol on the note–it has three humps instead of two. Meanwhile, the kidnappers order Julie to provide turkey dinners to the homeless in exchange for the return of the grandmother. Julie complies and her grandmother is returned safely, leading Stottlemeyer to put the case “”on the back burner.”” True to her promise, Julie informs Monk of a loophole that will all 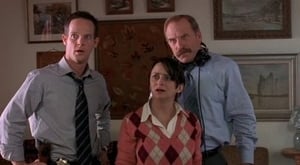