Mr. Monk and the Three Pies

When Monk’s older brother Ambrose calls him about a “”life-or-death matter,”” Monk accepts the call grudgingly and agrees to meet the brother from whom he’s been estranged since Ambrose refused to attend Trudy’s funeral seven years before. In fact, Ambrose, an agoraphobic packrat whose house is full of bundled up newspapers, has not left the home he and Adrian grew up in for thirty-two years. Believing Ambrose’s claim that his next-door neighbor, Pat Van Ranken, has murdered his wife after a loud argument, Monk and Sharona visit Van Ranken and decide to follow him. Van Ranken, meanwhile, is behaving very strangely, entering a potato sack race and a bingo tournament in which the prizes include a cherry pie. It’s not hard for the Monk brothers to tie Van Ranken to another murder involving a cherry pie–the challenge is finding a motive for Van Ranken and proving that he did it. The episode provides a glimpse of Monk’s family background and the reasons for his estrangement from his brother, 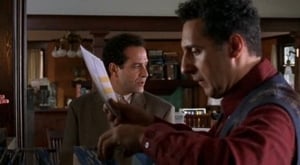